I think we've reached saturation with casinos and racinos. For every one that opens, another has to close.

Sorry, Atlantic City, but your oil wells are going to run dry. What are your plans for the next job generator? Oh, so you got addicted to gaming and didn't make any plans. Sheesh! The smart people will move elsewhere, if they haven't already. And Donald Trump doesn't want his name on his failed casino, either, so he's suing to have it removed.
Posted by Bruce Hobbs at 5:58 PM No comments:

On Aug. 21, 2014, the Huffington Post ran an article defending an artist who published pornographic pictures of his two-year-old daughter and called it art. And, in order to generate page clicks, they included some of the pornographic pictures so you could see for yourself that they are pornographic. In my world, any public picture of a boy's or girl's genitals for a child under the age of 18 is child pornography.

Showing child pornography is a new low, even for HuffPo. Of course, they won't be prosecuted and the father probably won't either. He's an artist victimized his own daughter for his personal gain, you see, not some dirty old man passively downloading pictures from the Internet.

I'm all for the innocence of children. But when you photograph children in this way, you have perverted this innocence into something so much worse. Considering how much sexual abuse of children exists these days, we have to draw the line to avoid even the appearance of exploitation.

Google News, viewed with Google Chrome on my Apple iPhone 4S, has five flaws. When I view Google News, I am signed on to my Google account. This customizes the news for me.

First, look at these screen shots, taken today, one at 8:30 a.m. EDT (United States) and one at 8:32 p.m. Do you see any difference with the news? Nope, neither do I. The thing that bothers me the most is the age of the stories. In the a.m. version, the China story is supposedly one hour old. Shouldn't it be 13 hours ago 12 hours later? How do I get new stories? Eventually (overnight), they will be updated but during the day I have to manually refresh the display. Even after I manually refresh, it still tends to revert to the early-morning version. 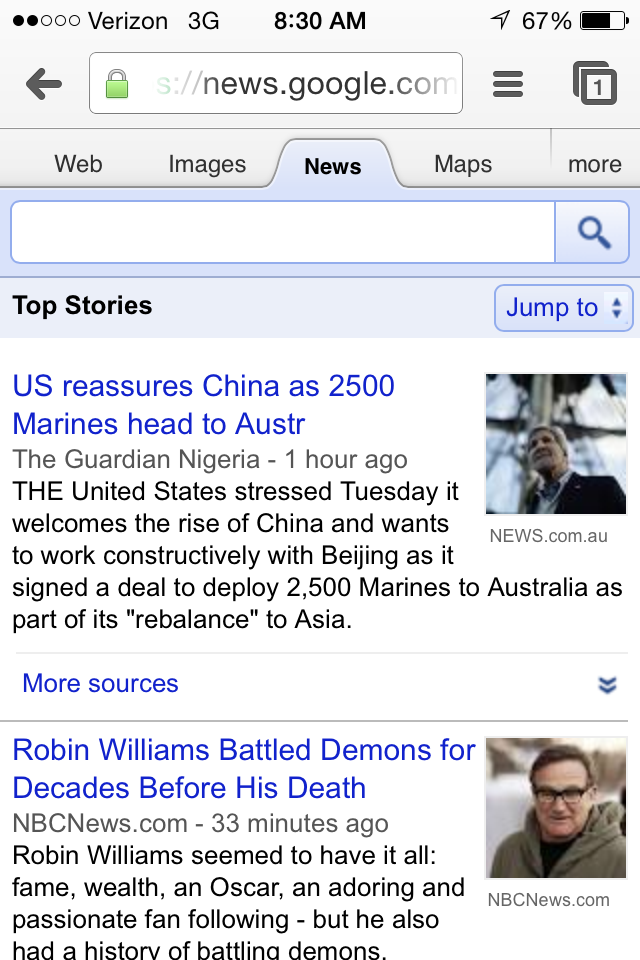 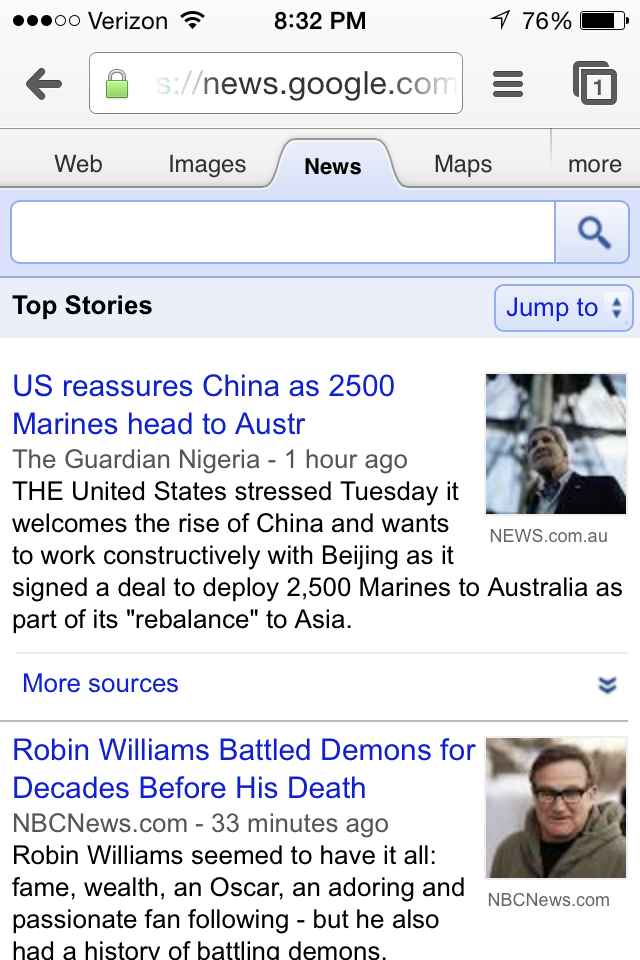 Second, as you know. Major League Baseball games are played in a series of two or more games (up to five when the Chicago Cubs played the Cincinnati Reds recently). Google News has no concept of separate games, completely mixing up the stories about the games in the series. I would prefer that each game in the series be listed separately with the pregame and postgame stories shown together.

Third, Google News does not evaluate the quality of the news sources but figures that the last news source is the best. This results in the main story being from a dodgy source (like a site that scrapes stories from other sites) or an Associated Press story instead of the breaking story from the local news media. Take the first story above. The main source is a newspaper in Nigeria. Nigeria? Clicking on "More sources" gives you stories from Sydney Morning Herald (yes, Sydney as in Australia) and Daily News & Analysis. If I click on "all 397 news articles," I get a list of articles about sending advisers to Iraq and not a peep about China (this normally doesn't happen; it's just a glitch). Normally, I get the better stories only if I click through.

I recently wanted to read about an incident in Miami, Florida. The first story was an AP story in the Seattle (Washington) Post-Intelligencer. I had to dig to get an actual story from a television station in Miami. I miss the days when there was only one copy of Associated Press stories. Now there are dozens of them, all repeated ad nauseam as if they were unique.

Fourth, I have local news sections for two cities (Norwood, Ohio, where I live and Brookville, Ohio, where I work some of the time). These sections were rarely updated, although that may be fixed once I complained. Here is an example from April 1 (no fooling): 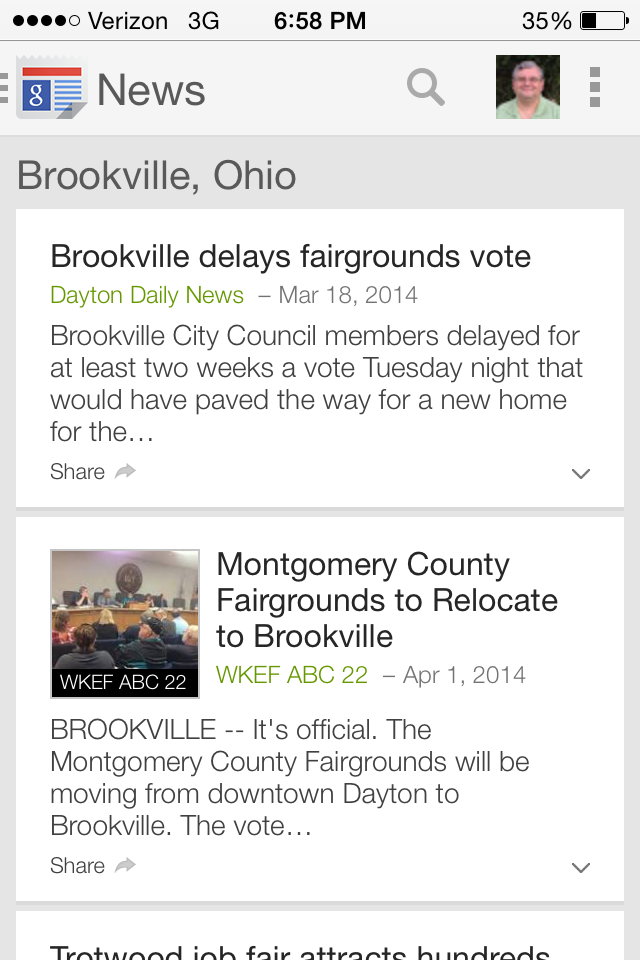 So which is it? A delay or an approval? If you look closely, the first story is dated March 18 and the second April 1. In those days, a story could stick for a month or more even though there's always new news to replace it. I had a disgusting Brookville child molestation story stuck on there for so long (over a month) that I finally flamed Google and it was fixed within hours. (There is an option to provide feedback about News separately from feedback about Chrome.)

Finally, on my iPhone the page takes at least 15 seconds to load (Aug. 13: 29 seconds). To load Google News on my MacBook Pro, using the same wireless Internet connection, takes three seconds. I suspect the problem is with either DNS lookup or SSL negotiation. Update Aug. 24: The problem is a Chrome problem that affects other sites as well. I have filed a report with Google but no fix yet.

I will still use Google News but I am still frustrated with its limitations. Thanks, Google, for letting me vent about this on Blogger, operated by Google. I will update this post as the situation improves.

Prayer: Creating the illusion of helping

Recently, the college-age daughter of a friend of mine, let's call her Jennifer (not her real name) got drunk and slipped on a boat dock, fracturing her spine. The doctors were able to patch her up and she has no paralysis now, but she will be forever vulnerable to further injury which could cause her to become a paraplegic.

When my friend posted this news on Facebook, there was an outpouring of support: "Sending prayers to both of you." "Prayers, love and hugs" "Praying for her, for you, for the doctors and nurses." were just three of the messages.

Let's get this straight right now: There is no "Prayer Central" in Heaven with operators standing by. You can pray all you want but they go nowhere. How do I know? Are you telling me that nobody prayed for Jennifer before she broke her back? Of course they did! Her mother did, at a minimum. And yet, despite these prayers, she got drunk and slipped and fell. You have two choices here: Either prayer is ineffective or God (or Jesus Christ, if that is your God) listens to your prayers and decides to totally screw up your life because She didn't like the way you prayed.

I do not believe in a vengeful God. The God I believe in represents Love, Spirit, Truth, Kindness and Light and would never do something to hurt one person for the benefit of others. Praying to God for victory in either sports or war is meaningless.

Friday, my wife and son, who car pool to work, were five minutes late. As they merged from one highway to another, they found the new highway to be almost vacant. A concrete mixer had tipped over before the merge, blocking several lanes. Did God tip over the concrete mixer, injuring the driver and delaying hundreds of cars, so that my wife and son could get to work on time? Of course not!

If prayer doesn't help a situation, it must have some benefit. It does. The person doing the praying, and posting about it on Facebook, receives the illusion that they are doing something positive about a bad situation. In reality, they are doing nothing but they feel good because they think they have done something good. Also, in the case of Jennifer, her mother benefits because she found out that there is a whole community of people who are there to support her. But did the prayer affect the outcome? Not a bit. Jennifer will never be whole and will have to live with a partially mended back for the rest of her life.

The good news to me is that I see no harm in prayer. It is not going to make things worse. And I'm sure people who pray are better off for it. But thinking that it changes events in life is false.

People will disagree with me. Feel free to post comments. But if you feel hate, remember that hate has no place in God's world. If you believe in a Devil, hate is one of the Devil's tools. Hateful comments will not be allowed but you can go ahead and tell me I'm going straight to Hell because I don't believe in Hell.

Bruce Hobbs
I'm not expecting people to read this blog daily. Rather, I hope people find a page here or there through a search or by following a link that provides them with helpful information.

I will not bore you with news that's a week old. If I comment on news, it will be within one day of when the news comes out. Otherwise, I will comment on topics that are somewhat timeless.